LeTalker is the name of a Matlab GUI version of the three-mass model of vocal fold vibration originally described in: Story and Titze (1995). The specific implementation available here, however, is based directly on Titze and Story (2002) and Titze (2002). This allows for muscle activation levels to be specified as input parameters which are transformed to mechanical parameters of the lumped-element model. LeTalker includes both subglottal and supraglottal (vocal tract)systems. Vocal tract shapes can be chosen from the collection of area functions published in Story, Titze, and Hoffman (1996).

The intent in making a simple version of the model public is for demonstration purposes and for researchers interested in programming this particular lumped-element model. Users are free to use the code as a starting point for model development or as a comparison to previously written code (just give credit where due). Essentially everything in the code has been published in the papers cited above.

To install, download the "LeTalker_1.22.zip" file below and extract all files into a new folder or directory. Also download the associated pdf for additional instructions. From within Matlab, go to the folder with the extract files and type "LeTalkerGUI". This will open a control from which you can run the model.

NOTE 1: Previous versions LeTalker_1.0 and LeTalker_1.1 have been retired. Version 1.22 contains some bug fixes and a few new features. Note that version 1.22 fixes a bug with regard to removing the sub- or supraglottal vocal tracts. It is otherwise identical to version 1.2.

NOTE 2: This code is SLOW (i.e., it is entirely coded in Matlab). The default simulation duration is 0.05 seconds which runs fairly fast and will show several cycles of vibration, but doesn't provided much of a sample to listen to, if that is desired. The duration can be increased (see LeTalkerInstructions.pdf) to generate a more suitable sample for listening, but it will take some time (maybe 20-30 seconds depending on the duration).

Screenshot of the LeTalker_1.2 control panel 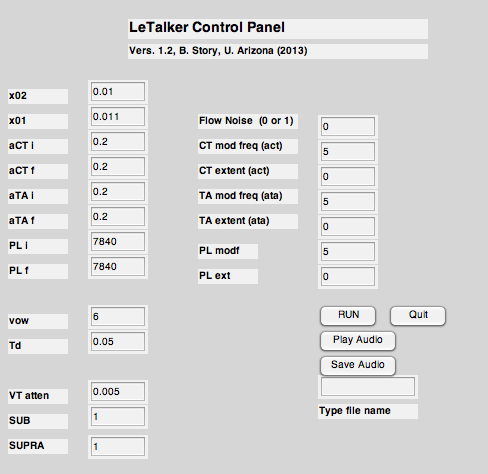